skip to main | skip to sidebar
This site is intended to share information relating to the management of the golf course conditioning and quality of Northmoor Country Club and the art, the science, and the factors that influence those conditions. Please visit as often as possible.

The photo below is from a Golf Course Management Facebook site.
It shows the traffic from 6 golfers on a green.
Notice the concentration of traffic at the flagstick.
This is from 6 golfers.
Imagine the wear around the cup after 150 -200 golfers play the hole.
This is why it is so important for players to walk carefully on the greens to avoid leaving spike or drag marks. 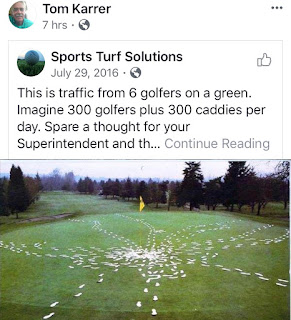 Posted by Tommy Witt, CGCS at 7:30 PM No comments:

Why is it wet this morning?
Did you water last night?
Did it rain last night?
These are common questions that I receive from several golfing members.
In fact, we irrigate the turf as little as possible.
We irrigate only when the turf needs it to prevent wilt and turf loss.
Another reason for our limited irrigation is due to the poor quality of the effluent water that we use for watering the course.  It has a few elements that, in elevated amounts, have a negative effect on turf quality (sodium and bicarbonates.)

There is a term in the golf business "dew sweepers"
These are the early morning players who play before the morning dew has dried from the turf's surface.

Below are a few photos of early morning golf course dew. 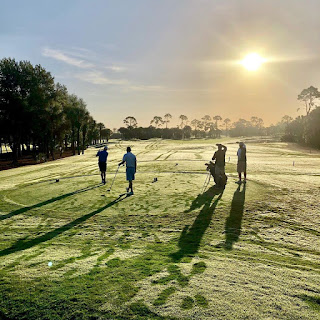 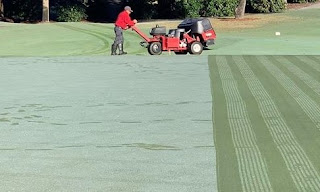 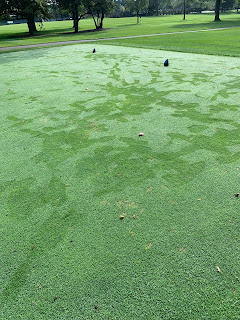 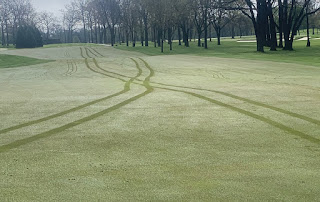 Posted by Tommy Witt, CGCS at 4:59 PM No comments:

Our annual April 1st target date for opening the golf course is still on target.  While we have had several nice days in March, we have continued on the temporary greens.  The main reason is for an agronomic term known as root shearing.  Root shearing can occur when foot traffic is exposed to greens that are soft and beginning to thaw.   Damage can occur when the turfgrass roots are sheared by the compaction of foot traffic.  Roots are the foundation of any healthy turfgrass plant.  Damaging the root system going into the spring must be avoided to ensure a healthier turf that can withstand the stresses of season long golf pressure.   Please take a look at several published articles below. 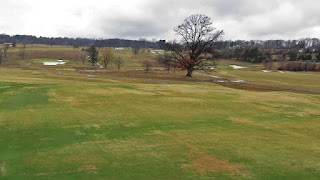 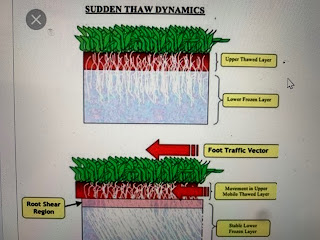 Excitement for the upcoming golf season begins to build during late winter. While some golf facilities in the Northeast close for winter, others continue to allow play depending on the weather. When the weather is favorable, allowing play usually is a fairly simple decision. However, the decision becomes much more difficult when the weather fluctuates between extremes. Mild and sunny days in February and March might be enticing to golfers, but lasting turfgrass damage can result when winter play is allowed under the wrong conditions.
Playing golf during highly variable winter weather can result in turf damage. During late winter, cold snaps often follow periods of warm temperatures. Under these conditions, turf is extremely vulnerable to injury from traffic. Play during a sudden thaw can be especially damaging because the upper 1 or 2 inches of soil can defrost while the underlying soil remains frozen. Traffic under these conditions can shear turf roots at the interface between the thawed and frozen layers. Such shearing can compromise turf health come spring.
Frozen soils also cannot drain. When precipitation occurs, the surface of frozen soils will remain saturated and prone to injury. Soils also dry slowly during late winter due to short day length and cool temperatures, so even unfrozen soils will be slow to dry and firm up after precipitation. Soft surfaces are more vulnerable to damage from foot traffic, ball marks, rutting and compaction.
It is important to remember, no matter how thawed or frozen the soil is, turf is unlikely to be growing during winter. Grass that isn’t growing cannot recover from damage until spring. Therefore, turf damage that occurs during winter can have a cumulative effect that lasts until warm weather arrives and the grass is able to recover.
Before allowing winter play ask, what is the purpose of winter play? All golf facilities welcome additional rounds, but sometimes allowing play during winter presents more costs than benefits. Keep in mind that winter play under the wrong conditions may result in a net loss due to the expense of repairs or slow spring greenup.
https://www.usga.org/course-care/roots-are-not-elastic-54930.html

Roots Are Not Elastic!

By Darin S. Bevard, Senior Agronomist
January 15, 2010
WOW! The mercury pushes above the freezing mark for a couple of days in much of the region, and the questions regarding winter play have come rushing into our offices. The negative impacts of winter play are hard to quantify, which is what makes the topic so controversial. However, it is generally accepted that golfer traffic on dormant, frozen greens can create problems, even if only early in the growing season.
A bigger concern is playing on greens during freeze/thaw cycles, which are the conditions that are occurring right now. In recent days, the surfaces of greens have thawed, but underlying soils are still frozen within one or two inches of the surface. Under these conditions, the potential for root shearing is greatest. How much this actually occurs in debatable, but it is best to err on the side of caution and keep greens closed until thawing occurs deeper in the profile. Remember, if the underlying soils are frozen, water infiltration will not occur, thus keeping the greens spongy and more prone to mechanical damage from foot traffic and ball marks. In some instances, the need for revenue may trump caution, but beware of potential problems of subjecting greens to winter play. 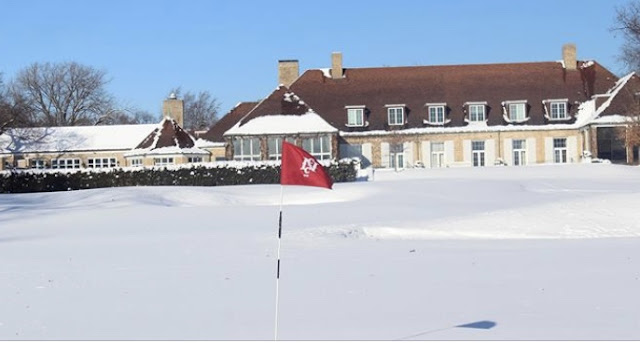 Posted by Tommy Witt, CGCS at 8:52 AM No comments:

The photos below are of the rainfall days and amounts that we received on site at NCC during the golfing season in 2019.  The goal lof any Golf Couse Manager is to maintain the course conditions as firm and dry as possible while keeping a balance to keep the turf in a healthy condition.  Rainfall has a huge impact on course conditioning.  It is not only the amount of rain that occurs during a timeframe but it is the frequency and amounts combined that affect playing conditions.  When rainfall occurs, even in small amounts every few days, the course does dry as quickly.  Sunlight, wind and warm temperatures are necessary for quicker course drying conditions.

Rainfall and snow days in April 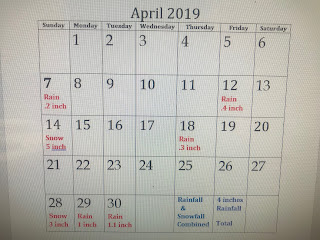 16 days of rainfall in May 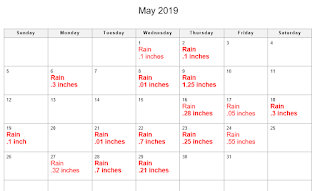 12  days of rainfall in June 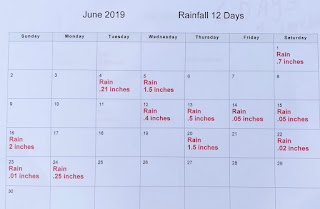 6 days of rainfall in July 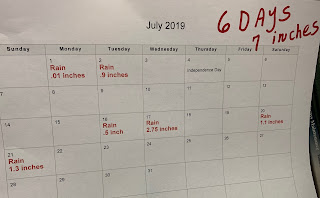 10 days of rainfall in August 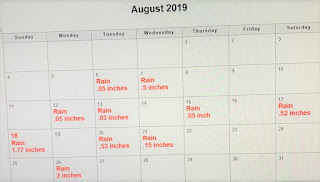 15 days of rainfall in September 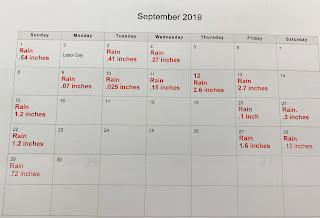 Posted by Tommy Witt, CGCS at 6:21 PM No comments:

Bunkers Are Not The Same

The new bunkers that we installed on the red and blue nines were constructed with the both the best new technology in bunker liners and the best sand in the industry.  The playability of the bunkers is tremendous.  Even though the new bunkers are of the highest construction quality, they are still subject to rainfall.   They do drain and dry quicker but individual bunkers will play differently for several days following a rain.

Bunkers will play differently throughout the golf course.  Based on their size, location to the green, the amount of play that they receive and where they are located in relation to sunlight, wind and shade will all affect the playing surfaces of the bunkers..

The photo below is an example of two bunkers, in close proximity, that might play differently.
The small bunker in front of red #1 green will likely be a bit "fluffier" than the bunker just behind it to the left of the green for two reasons.  The bunker is very small and will "catch" more balls because it is in front of the green.  Ball will roll to and accumulate in the very small area of the floor of the bunker.  Numerous golf shots will result in more disturbed sand, more footprints and increased raking.   The bunker located slightly behind and to the left of the green is located more in the shade and will slower to dry following a rainfall.   Thus, both bunkers, constructed the same and with the exact same sand will play differently. 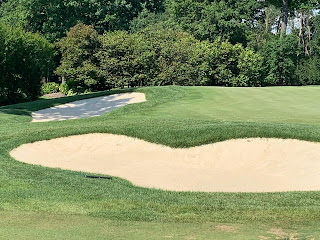 The video below is a good explanation of why all bunkers will not play consistently. 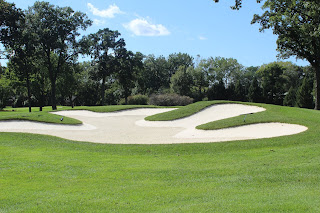 WGN's weather expert, Tom Skilling, reported that the month of August is the highest rain fall average based on perennial records.   Rainfall is only one of the factors that contributes to playing conditions.   Rainfall, higher humidity and hotter temperatures in August combine to impact the turf to a point it gets a bit "puffy" and not as firm and tight as normal.   This is an annual occurrence for every golf course in the North portion of the country. 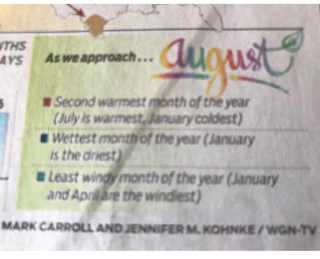 It has rained 9 of the  first 21 days of August. When it is warm and humid, it takes 3-4 days of sunshine and windy conditions to dry the course after a rain. 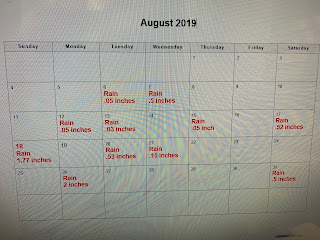 It takes a number of days following rainfalls for the course to dry. 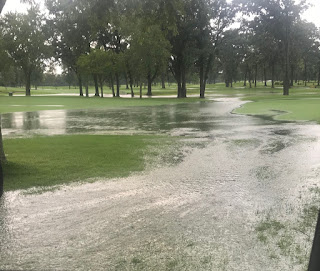 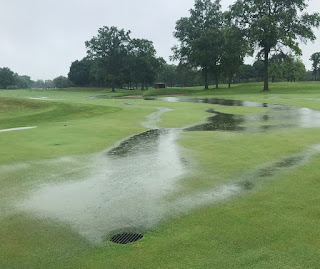 Winters With The Golf Course Staff